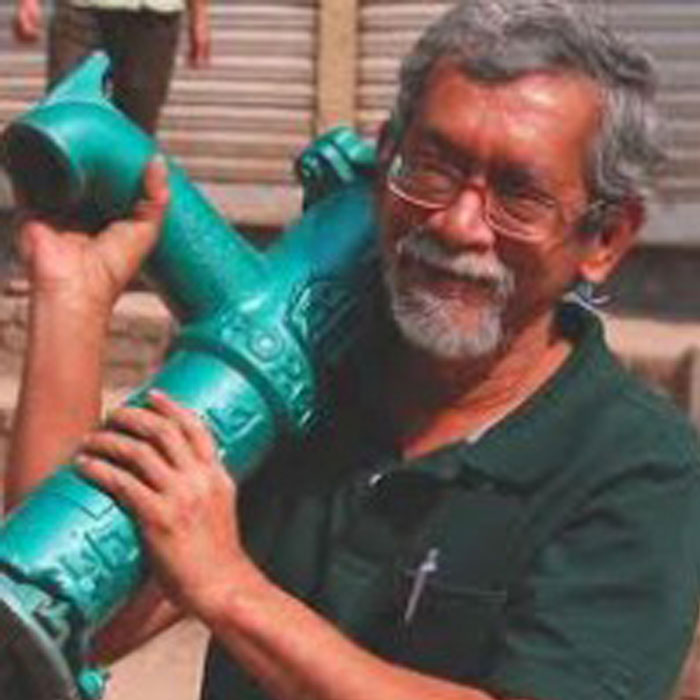 Meet Scale-Ups Fellow, Suprio Das
After working for more than 20 years as an electrical engineer , Suprio realized that life could be more meaningful and interesting than a scramble up the corporate ladder. He gave up his job and started his own business while volunteering with an NGO in villages around Kolkata. On regularly visiting the villages, it occurred to him that social work and engineering could be combined together to develop devices that could help the poor. The simple devices that he started designing brought him in touch with D-Lab at MIT and in addition to being invited four consecutive times to the International Development Design Summit in Boston, Ghana, and Colorado.

The Issue:
Both centralized and household-level approaches to water treatment have often failed to provide safe water to people currently drinking biologically contaminated water in both urban and rural areas around the world.

The Solution: An affordable chlorine doser for community water sources
Zimba is a device that automatically mixes chlorine into water in the correct proportions, regardless of the flow rate of the water. The device can be fitted to a community’s existing water source, such as the hand pump of a well, the tap of a rainwater harvesting cistern, or the faucet of a piped water system.

It does not require electricity, uses only gravity to operate and can handle thousands of liters per day. Zimba leverages the principle of an automatic siphon to add a fixed amount of chlorine per batch of water that is pumped in. Zimba was designed without moving parts such as hinges and gears that are known to be the first point of failure in most designs. The ratio of water to chlorine required in drinking water is so fine that it is measured in parts per million. This causes problems for most people working with chlorine. Zimba, however, works consistently within the sensitive parameters.

Zimba was selected by researchers of Stanford University and icddr-b for a three-month trial in the slums of Dhaka to study the accuracy and consistency of dosing (the dosers remained in use for a year). A single device was also under pilot trial for a yiear with Spring Health (a Paul Polak initiative) in Orissa and served more than 200 families.